99 photos
Yosemite National Park is one of the most beautiful and famous parks in the world. Yosemite contains countless waterfalls, several spectacular rock formations, meadows, fields, lakes, rivers, creeks and giant sequoias groves. It includes 840 miles of hiking trails, about 240 species of birds, 70 species of mammals and over 1,400 species of flowering plants. It embraces almost 1,200 square miles of scenic wild lands. The park ranges from 2,000 feet above sea level to more than 13,000 feet and has these major attractions; alpine wilderness, three groves of Giant Sequoias, and the glacially carved Yosemite Valley with impressive waterfalls, cliffs, and unusual rock formations. More history and information about Yosemite: http://www.nps.gov/yose/historyculture/index.htm, http://www.chevroncars.com/learn/wondrous-world/yosemite-history, http://www.yosemite.national-park.com/

Yosemite Valley is a glacial valley in Yosemite National Park in the western Sierra Nevada mountains of California, carved out by the Merced River. The valley is about 8 miles long and up to a mile deep, surrounded by high granite summits such as Half Dome and El Capitan, and densely forested with pines. A multitude of streams and creeks join in the valley, and flow out of the valley's mouth as the Merced River, which eventually flows to the Pacific Ocean. The valley is renowned for its natural beauty, and is widely regarded as the centerpiece of Yosemite National Park, attracting visitors from around the world.

The story of Yosemite began about 500 million years ago when the Sierra Nevada region lay beneath an ancient sea. Thick layers of sediment lay on the sea bed, which eventually was folded and twisted and thrust above sea level. Simultaneously molten rock welled up from deep within the earth and cooled slowly beneath the layers of sediment to form granite. Erosion gradually wore away almost all the overlying rock and exposed the granite. And even as uplifts continued to form the Sierra, water and then glaciers went to work to carve the face of Yosemite. Weathering and erosion continue to shape it today.

The oldest of these granitic rocks occur along the Merced River Gorge west of the valley and are thought to be 114 million years old. The El Capitan pluton intruded the valley forming most of the granitic rock that makes up much of the central part of the valley including Cathedral Rocks, Three Brothers and of course El Capitan. The youngest pluton of Yosemite Valley is the 87 million year old Half Dome granodiorite which makes up most of the rock seen at Glacier Point, the Royal Arches and its namesake Half Dome. For the last 30 million years, glaciers have periodically filled much of the valley.

President Abraham Lincoln signed a bill on June 30, 1864 granting Yosemite Valley and the Mariposa Grove of Giant Sequoias to the State of California "for public use, resort and recreation," the two tracts "shall be inalienable for all time". This was the first time in history that a federal government had set aside scenic lands simply to protect them and to allow for their enjoyment by all people.

In addition to the impressive granite structures that Yosemite is known for, the awe-inspiring waterfalls are absolutely magnificent in their power and beauty. The best time to see the waterfalls is during spring, when most of the snow melt occurs. Peak runoff typically occurs in May or June, with some waterfalls (including Yosemite Falls) often only a trickle or completely dry by August. Storms in late fall rejuvenate some of the waterfalls and all of them accumulate frost along their edges many nights during the winter. A list of the named waterfalls: http://www.nps.gov/yose/planyourvisit/waterfalls.htm

Yosemite is a photographer's playground of the highest level. From landscapes to wildlife, the photo opportunities are endless. Being there in May 2011 to witness the incredible abundance of water in the park was spectacular. The waterfalls were at their peak strength due to the record snowfall. http://news.yahoo.com/s/ap/us_yosemite_waterfalls The constant boom of the water flow was simply amazing. There were additional falls at every crevice, and streams running everywhere. My fall and winter trips to Yosemite also provide dramatic views with changing weather, fall colors, and the magic only a snowfall can create.

Yosemite will always be one of my favorite places to shoot. I've shot there for fall in October, winter in December, and spring in May. 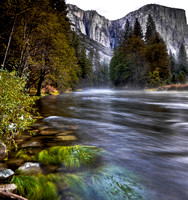 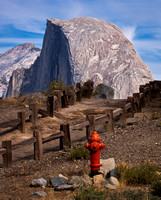