Home»Sports»Surfing»Awesome Waves at the Wedge!

61 photos
The Wedge, Newport Beach’s big wave, is a world-famous surfing spot. The waves are a by-product of improvements to the rock jetty. When conditions are right, and a wave approaches the shore at the proper angle, an approaching wave will reflect off the jetty creating a second wave. The reflected wave meets up with the following wave of the set and forms a peak. This pattern can repeat for several following waves as well. The combined effect of the reflected wave and the incoming wave creates a combined wave much larger than either of the two separate waves. This occurs very rapidly and forms waves in a very unpredictable and unstable pattern, so that no two waves are alike, and the exact breaking point is difficult to predict even for an experienced surfer. Although this condition primarily occurs with large south swells, it can also occur, with considerably lesser frequency, during normal conditions.

In addition, the beach at The Wedge is very steep, resulting in what is known as shore break, and a very strong backwash which often drags people back into the surf. The backwash itself frequently creates another outgoing wave, which can hit an incoming wave or surfer with enormous force.

With the combined effect of the unpredictability of where the incoming waves will break, and the strength of the backwash, the resulting wave action can be highly unpredictable and therefore both exciting as well as very dangerous. It is this combination of danger and excitement which draws so many to surf the Wedge. Waves break largest when intense Southern Hemisphere storms, large tropical depressions, or hurricanes send their energy from the proper SSW direction, primarily during the summer & fall months.

Here are some in-the-water photos (not mine!) of Hawaiian pro surfer Jamie O’Brien, who was at home on Oahu when he got the word that the National Weather Service had issued a high surf advisory for the beaches of Orange County, California for labor day weekend 2012. O’Brien caught the next flight to the mainland: http://www.wired.com/playbook/2012/09/jamie-obrien-rides-the-wedge/

We too headed to the Wedge. The waves were a rush. Surfers sure are easy on the eyes. ;-) 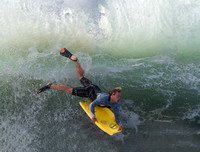