66 photos
It was photographer's day at Santa Anita, 329 photogs in attendance. What a terrific event!

I shot with a press credential starting at 6:30 am with the training horse workouts. A wonderful breakfast followed by a Q&A session with experts in the industry that included: 1) Bob Baffert, the most successful horse trainer in thoroughbred racing history. 2) Joe Talamo, a successful jockey now age 21, he was the youngest jockey to race in the Kentucky Derby three years ago at age 18. 3) Benoit Photo, the official track photographers of all the southern California thoroughbred tracks. 4) Richard Fuller from the Brooks Institute of Photography in Santa Barbara. 5) And as MC, Peter Lurie, who is a TV personality, sports anchor, and voice actor. Peter is currently an anchor on HRTV and an in-house host at Fairplex Park.

Throughout the day there were tram rides past all the barns for a one-of-a-kind behind the scene's glimpse of where the horses live. We were able to photograph all the scenic areas of this beautiful racing park. We could hang out with the carriage horses, photograph the saddling area and the jockeys mounting their horses. But, by far, the most exciting part of the day was being in a small group of 10 that was taken out onto the track to photograph a race at close range, and up close at the winner's circle. I was in a group to shoot the first race, which was on the outside dirt track. I was also in a group to photograph the 6th race which was a turf race, and the only race with the starting gates located just down from the finish line.

We stayed to photograph all eight races, we were at the track from 6:30am until almost 5pm. Constantly walking back and forth from one end of the track to the other to get the best shooting location for each race. I organized two groups of photographers to attend, about 30-35 total, it was fun to see a lot of my photog friends there.

This was the first time the track had ever hosted a photographer's day. The event was a huge success! 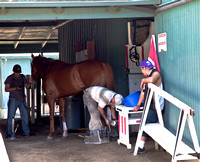 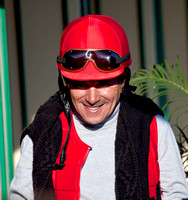 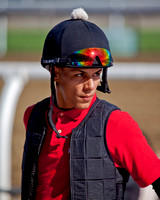