8 photos
Built in 1874, the Point Fermin Lighthouse was the first navigational light into the San Pedro Bay. The lighthouse was staffed by federal employees under the Treasury Department and regulated by the US Lighthouse Board. These employees were called Lighthouse Keepers. It was their job to keep the light lit as a beacon for ships, maintain the lighthouse lens, and the general up-keep of the building.

The structure was designed using the Stick Style, an early Victorian architectural style, which is simpler in design and decoration than the later high Victorian period. It is characterized by its gabled roofs, horizontal siding, decorative cross beams and hand carved porch railings.

Visiting the lighthouse in the late 1800's became a popular activity for the local residents as well as many from the greater Los Angeles areas. The US Lighthouse Board both required and encouraged keepers to allow the public access to the property, tours were given of the lighthouse and its workings. Much like today, the point itself was a popular site for picnicking and social activities, especially as the town of San Pedro grew larger near the turn of the century.

Between the years of 1927 and 1941, the light was electrified and managed by the city. On December 7th, 1941, Pearl Harbor was bombed and the coast was blacked out for fear of being a beacon to enemy ships and planes. Sadly, the light was never to be lit again. During WWII, the lighthouse served the US Navy as a lookout tower and signaling station for ships coming into the harbor. After WWII, the lighthouse was again turned over to the City of Los Angeles for use as a residence for park maintenance employees. It was during WWII that the lens and lantern room on top of the lighthouse tower was removed and a square room was set in its place. This unsightly addition was often referred to as the "chicken coop." In 1972, two devoted citizens raised funds and worked diligently to replace the lantern room and the lighthouse to its original glory for her 100th birthday in 1974. Their efforts also placed the lighthouse on the National Register of Historic Places.

For the complete history of the lighthouse: http://pointferminlighthouse.org/history.html 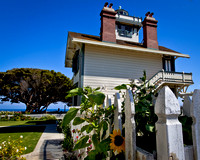