33 photos
Death Valley National Park is world renowned for its extremes, home to our nation's driest, hottest, and lowest place, but also sporting mountains over 11,000 feet high that experience below-zero weather and snow. A superlative desert of streaming sand dunes, snow-capped mountains, multicolored rock layers and water-fluted canyons, all of which are world renowned for their exposed, complex, diverse, and unique geology and geomorphology.

Death Valley National Park is located mostly in Inyo County, California, within the Mojave Desert, near the border of California and Nevada, east of the Sierra Nevada mountains. It is an area of about 3,000 square miles and 3 million acres of wilderness.

Badwater is a basin which is the lowest elevation in North America at 282 feet below sea level. It is 140 miles in length, and up to 16 miles wide. This point is only 84.6 miles ESE of Mount Whitney, the highest point in the contiguous United States with an elevation of 14,505 feet.

It easily meets the definition of a desert: a place where the annual evaporation is higher than the precipitation. All the water that falls evaporates; if more fell, it would evaporate too. The record set for the least rain in a year was 0 in 1929 and 1953. Annual precipitation varies from 1.9 inches on the valley floor to over 15 inches in the higher mountains. Despite a low rainfall, Death Valley is prone to flooding at times because the arid soil is unable to absorb water. In 2004, a flash flood was reported in the valley resulting in the loss of two lives and closure of the park.

To survive in such adverse conditions, the park's plants and wildlife have developed an amazing series of evolutionary adaptations, giving rise to a surprising diversity of life. Over 900 plants species have been found in Death Valley, with at least 55 endemic to the park and its vicinity. In addition, 17 species of mammals, fish, and snails that live in Death Valley occur nowhere else in the world. Also found in this park are desert tortoise, coyote, kit fox, ringtail cat, bighorn sheep, and a variety of lizards, snakes, bats, squirrels, and birds, including red-tailed hawk and roadrunner. The most amazing occupant of Death Valley is a fish called Devil's Hole Pupfish. This species has managed to survive here for thousands of years, despite the monumental changes in its environment. Environmentalist believe that the ice-age ancestors of these pupfish swam in a vast lake, some twenty thousand years ago. These fishes began to develop unique characteristics in response to the climate changes of its environment. These species of the pupfish are the evolved relative of its ancestors.

Death Valley is truly one of the most unique places on our planet. We spent two nights, two mornings, and one full day there in February 2011. Didn't see any critters other than a chipmunk that ran across the road, and lots of interesting tracks in the sand dunes, including bird, beetle, rodent, fox and snake tracks. We heard a song bird's beautiful sounds, and I fed tortilla chips to a raven couple outside our motel room. The daytime temps were in the 70s, evenings in the 40s. It was a great experience to see Death Valley for the first time, I can't wait to go back! 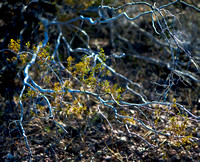 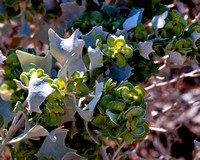 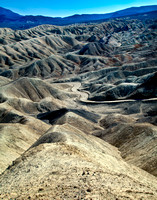 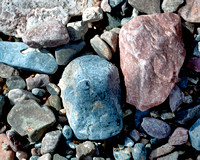