8 photos
There are about 30 species of Dahlia, and over 20,000 cultivars are grown today. These tuberous plants are popular for their amazing range of colors and flower shapes.

Dahlias are native to the subtropical and mountainous regions of Central and South America. Plants have been cultivated and hybridized since the Aztecs. The flowers and plants had many uses including beautifying gardens, herbal medicines, water pipes, and food for animals. They were important as a root crop and as a medicinal plant among the pre-Columbian Indians. Dahlia imperialis, the "tree dahlia", had hollow stems up to 20 feet long which were used for hauling water; the Aztec name was acocotli, or "water-cane". Dahlias made their way to Europe in the 18th century. By the 1800s, hybrids were being created in both Europe and the United States. As of 2011, the hybridization continues.

The flower symbolism associated with the dahlia is dignity, elegance, forever thine. The Aztecs used dahlias as a treatment for epilepsy. Europeans used the dahlia as a source of food in the 1840s when disease destroyed the French potato crop. The dahlia is named after Swedish 18th-century botanist Anders Dahl. Dahlias are often grown for flower shows. The English name is derived from the flower name, from the surname of Swedish botanist Anders Dahl, meaning "valley," hence "dahlia flower" or "valley flower". 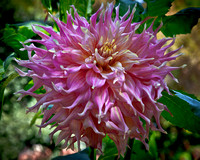 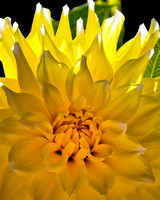