27 photos
Typical coyote packs consist of six, closely related adults, yearlings and young. Coyote packs are generally smaller than wolf packs, and associations between individuals are less stable, thus making their social behavior more in line with that of the dingo. Coyotes are primarily nocturnal, but can often be seen during daylight hours. They were once essentially diurnal, but have adapted to more nocturnal behavior with pressure from humans. Though coyotes have been observed to travel in large groups, they primarily hunt in pairs.

Coyotes are opportunistic, versatile carnivores with a 90% mammalian diet, depending on the season. They primarily eat small mammals, such as voles, prairie dogs, eastern cottontails, ground squirrels, and mice, though they will eat birds, snakes, lizards, deer, javelina, and livestock, as well as large insects and other large invertebrates. The coyote will also target any species of bird that nests on the ground. Though they will consume large amounts of carrion, they tend to prefer fresh meat. Fruits and vegetables are a significant part of the coyote's diet in the autumn and winter months. Part of the coyote's success as a species is its dietary adaptability. As such, coyotes have been known to eat human rubbish and domestic pets. They catch cats and dogs when they come too close to the pack. Urban populations of coyotes have been known to actively hunt cats, and to leap shorter fences to take small dogs.

Coyotes will sometimes form a symbiotic relationship with American badgers. Because coyotes are not very effective at digging rodents out of their burrows, they will chase the animals while they are above ground. Badgers, on the other hand, are not fast runners, but are well-adapted to digging. When hunting together, they effectively leave little escape for prey in the area.

Coyotes are capable of digging their own burrows, though they often prefer the burrows of groundhogs or American badgers. Coyote territorial ranges can be as much as 19 kilometers in diameter around the den, and travel occurs along fixed trails. The average distance covered in a night's hunting is 2.5 miles. In areas where wolves have been exterminated, coyotes usually flourish. For example, as New England became increasingly settled and the resident wolves were eliminated, the coyote population increased, filling the empty ecological niche. Coyotes appear better able than wolves to live among people.

The calls a coyote makes are high-pitched and variously described as howls, yips, yelps, and barks. These calls may be a long rising and falling note (a howl) or a series of short notes (yips). These calls are most often heard at dusk or night, but may sometimes be heard in the day, even in the middle of the day. Although these calls are made throughout the year, they are most common during the spring mating season and in the fall when the pups leave their families to establish new territories. When a coyote calls its pack together, it howls at one high note. When the pack is together, it howls higher and higher, and then they yip and yelp and also do a yi-yi sound, very shrill, with the howl.

The gray wolf is a significant predator of coyotes wherever their ranges overlap. Since the Yellowstone gray wolf reintroduction in 1995 and 1996, the local coyote population went through a dramatic restructuring. Until the wolves returned, Yellowstone National Park had one of the densest and most stable coyote populations in America due to a lack of human impact. Two years after the wolf reintroductions, the population of coyotes had been reduced 50%.

Coyotes have been known to live a maximum of 10 years in the wild and 18 years in captivity. They seem to be better than dogs at observational learning. Coyotes will sometimes mate with domestic dogs, usually in areas such as Texas and Oklahoma, where the coyotes are plentiful and the breeding season is extended because of the warm weather. The resulting hybrids, called coydogs, maintain the coyote's predatory nature, along with the dog's lack of timidity toward humans, making them a more serious threat to livestock than pure-blooded animals. This crossbreeding has the added effect of confusing the breeding cycle. Coyotes usually breed only once a year, while coydogs will breed year-round, producing many more pups than a wild coyote. Breeding experiments in Germany with poodles, coyotes, and later on with the resulting dog-coyote hybrids showed that, unlike wolfdogs, coydogs exhibit a decrease in fertility, significant communication problems, and an increase of genetic diseases after three generations of interbreeding.

Most of my coyote photos were captured at the Bolsa Chica Ecological Reserve in Huntington Beach, California. There was a resident pack that I photographed up to four at a time hunting together. We heard rumors that all the coyotes had either been relocated or exterminated. Months went by with no coyote sightings, no word of their existence at Bolsa Chica .Happily, at least three are back, most likely the pack is larger. There are now many reports of sightings, and some fortunate photo opportunities! 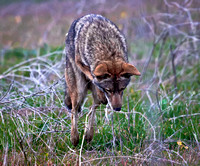 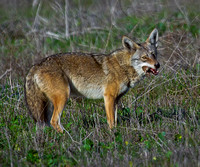