16 photos
Cooper's Hawk (Accipiter cooperii) is a medium-sized hawk native to the North American continent and found from Canada to Mexico. As in many birds of prey, the male is smaller than the female. The birds found east of the Mississippi River tend to be larger on average than the birds found to the west.

Cooper's Hawk was first described by French naturalist Charles Lucien Bonaparte in 1828. It is a member of the goshawk genus Accipiter. This bird was named after the naturalist William Cooper, one of the founders of the New York Lyceum of Natural History (later the New York Academy of Sciences) in New York. Other common names; Big Blue Darter, Chicken Hawk, Hen Hawk, Mexican Hawk, Quail Hawk, Striker and Swift Hawk.

There are four juvenile Cooper's hawks that live in a very small park in Huntington Beach, California. When we photographed them they were still relying on mom to feed them. Being such a small park, mom was very protective. She came after me several times when I was pointing my camera at her. She did not make contact with me but word has it she also attacked a small child, pulling some hair out of her head. We didn't see mom very often, she must have been off hunting all day with four young to feed. 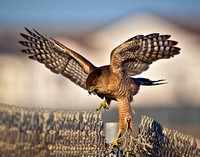 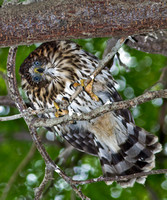 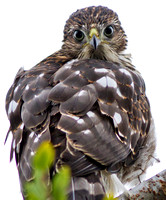 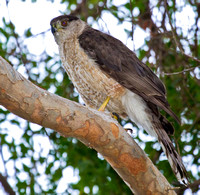 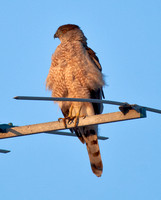