Just Another Day of Fishing

There is a park in Long Beach California, El Dorado Regional Park, a favorite place for photographers and fishermen. In the winter the lake is stocked with nice, plump, healthy, Rainbow Trout. It's obvious why people like to fish there... 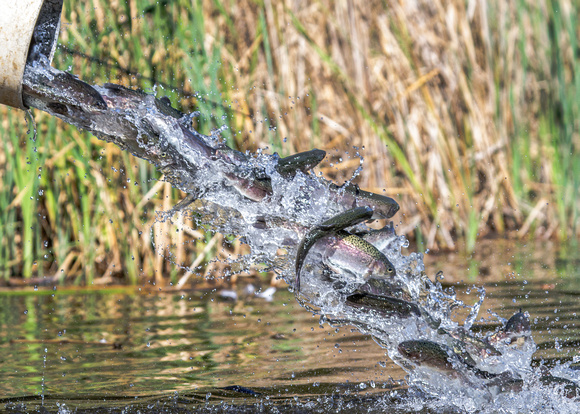 Photographers flock to El Dorado Park for the osprey action. Usually, a day after each stocking, the south west shore of the lake is lined with tripods and long lenses. The park has some very contented resident opsreys. There are areas of the lake where they fish very close to the shore, providing wildlife photographers with that much desired opportunity to get close-up photos of an osprey fishing. There are not that many lakes that offer a consistent chance of being so close to the action, although it's never guaranteed, in fact most of the time the bird will drop too far away, or fly off in the wrong direction. But we all love the challenge... And this year I won the osprey fishing lottery. :-)

It was a cold Saturday in January. As is the case so many times... we were just about to leave, after several unsuccessful hours of waiting and hoping, when we saw the osprey hunting and thought we would give it one more try. 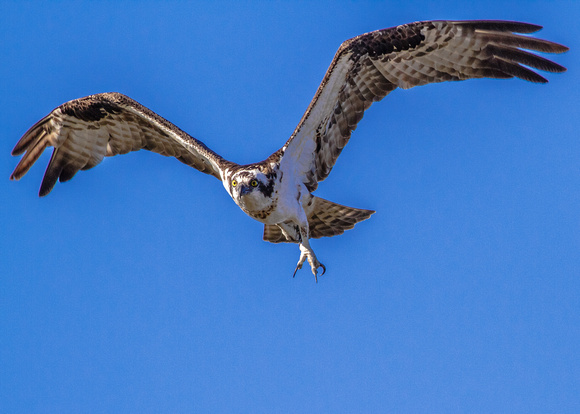 She seemed really determined this time, I started to get hopeful... 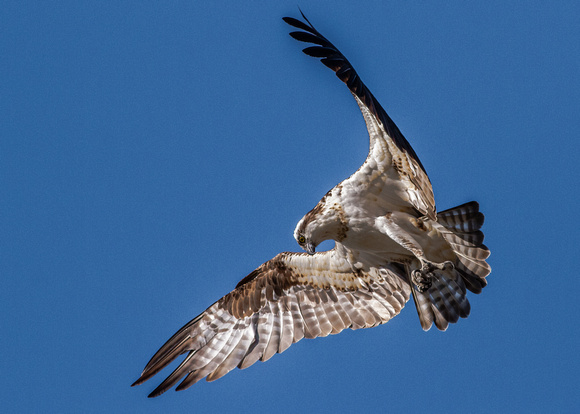 An osprey's vision is well adapted to detecting underwater objects from the air. Prey is first sighted about 130 feet above the water, she hovers momentarily, then plunges feet first into the water. 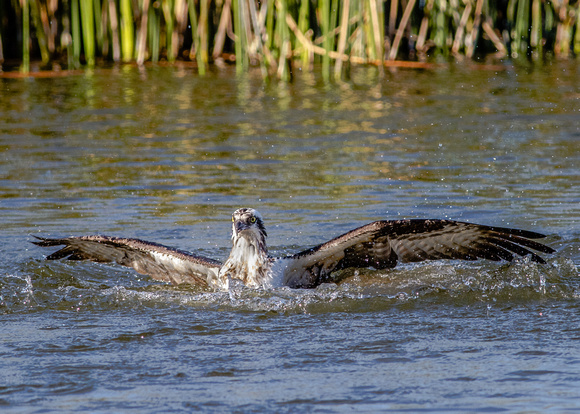 I didn't think I would be able to track her all the way down through the air and catch her again when she surfaced so I sacrificed the dive and plunge to be ready and focused on her when she exited the water.

She hesitated for quite awhile before she flew out of the lake with her prize. She took a lot longer than usual to grab her meal. I was expecting to see a really big fish when she eventually raised up, based on how long it took her to secure this catch. 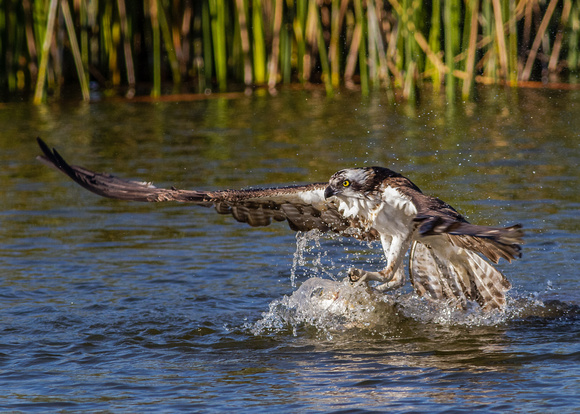 My heart was beating up a storm now... Here comes the moment photo dreams are made of... 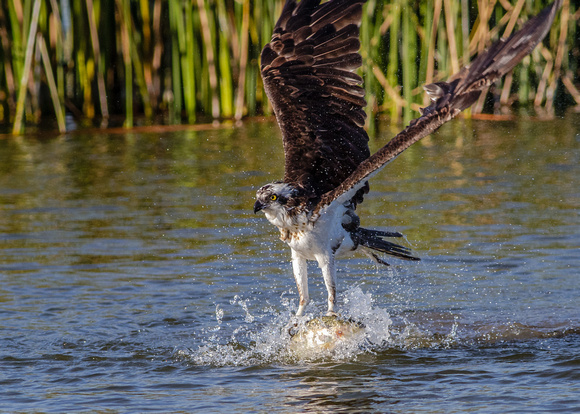 Not only did she score extremely close to us, but she flew off in our direction! You just can't ask for a better photo op. 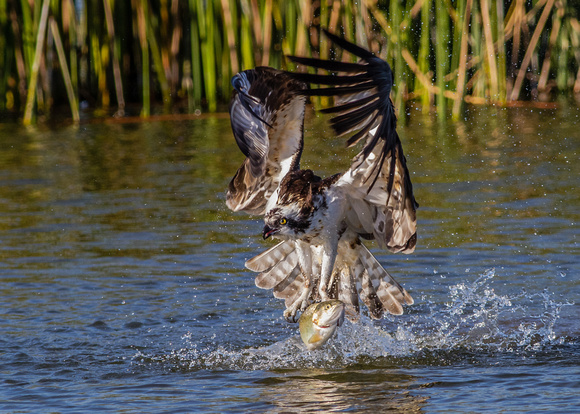 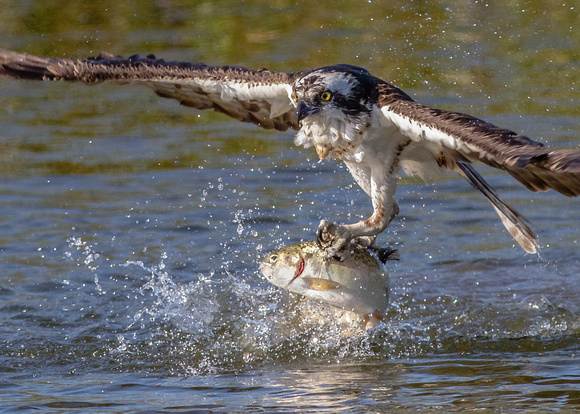 Osprey and owls are the only raptors whose outer toe is reversible, allowing them to grasp their prey with two toes in front and two behind. This is particularly helpful when grabbing slippery fish. 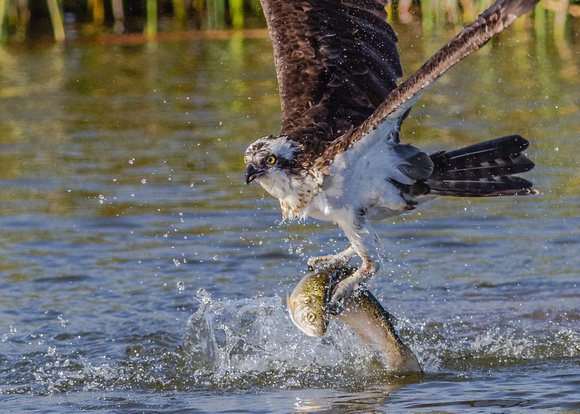 They have backwards-facing scales on their talons which act as barbs to help hold the catch. 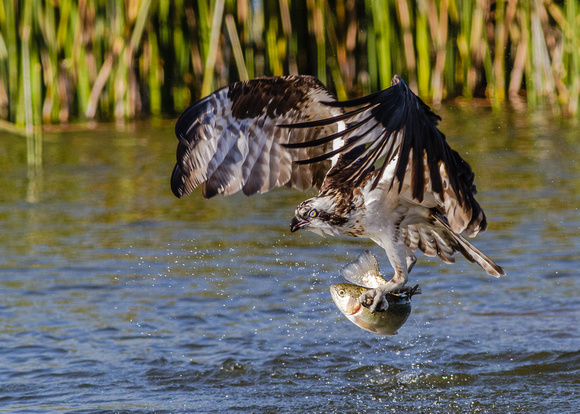 Their nostrils close to keep out water during their feet-first dives. 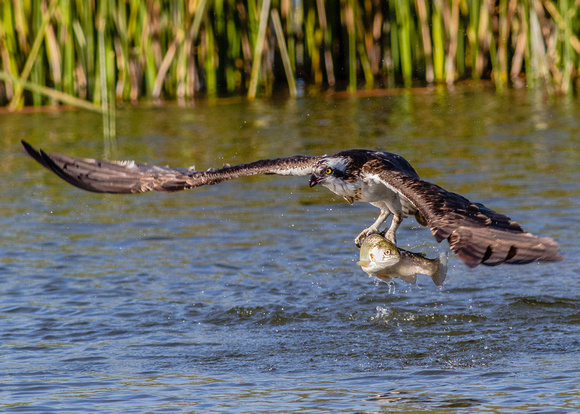 Their wingspan is about 5 feet across. 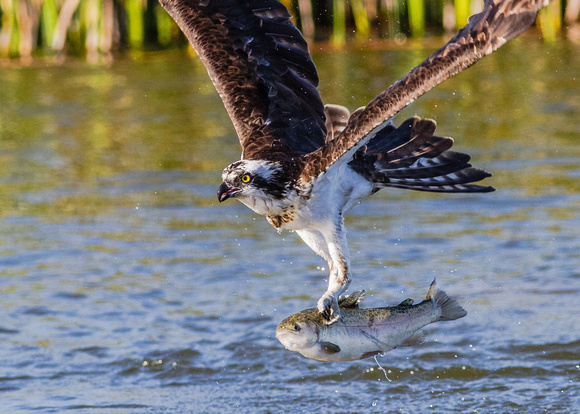 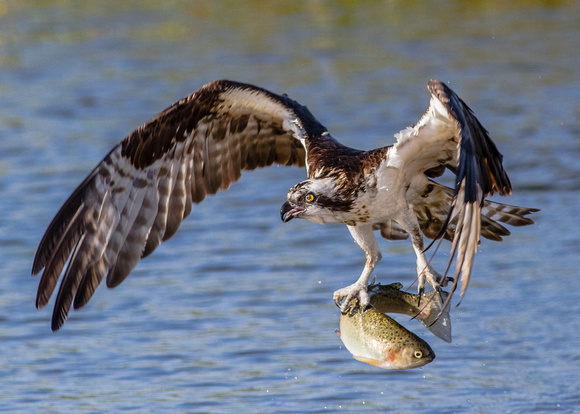 Exciting moments like this seem to have a surreal seal to them, meaning time moves very fast and very slow at the same time. 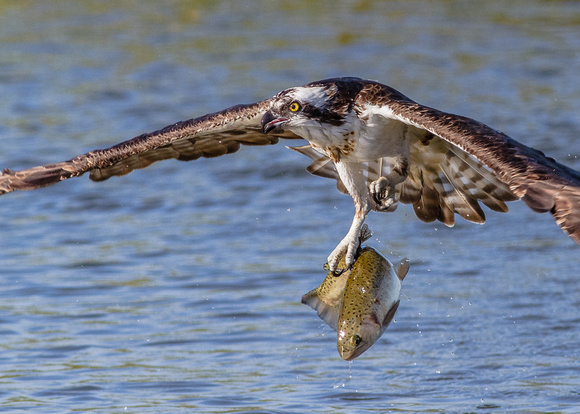 The camera is bursting away, I'm seeing life explode before me through the viewfinder, sometimes it all happens so fast I have no idea what shots I got till I look at them. 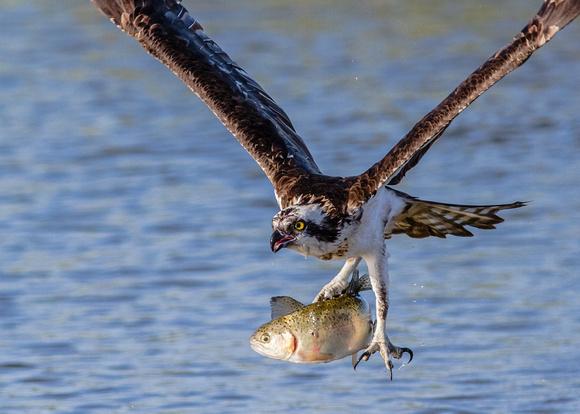 Other times I can see the images actually evolve in real time through the viewfinder. But most of the time it's just one big rush that takes my breath away. Then I can't wait to look at my photos to see if I got any keepers. 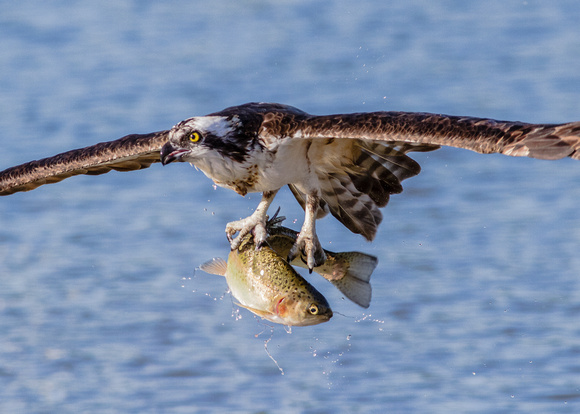 As the osprey was making her way off with her lunch, she flew right by us! I had absolutely no idea if my camera was getting anything or not. The lens I use requires a minimum distance of 11 feet from the subject. It sure felt like she flew by too close... 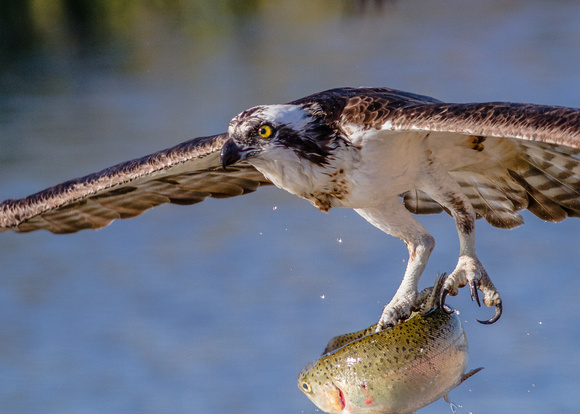 Was I surprised and totally thrilled to see that I got the shots! (Although I wish I hadn't cut off the bottom of the fish...) 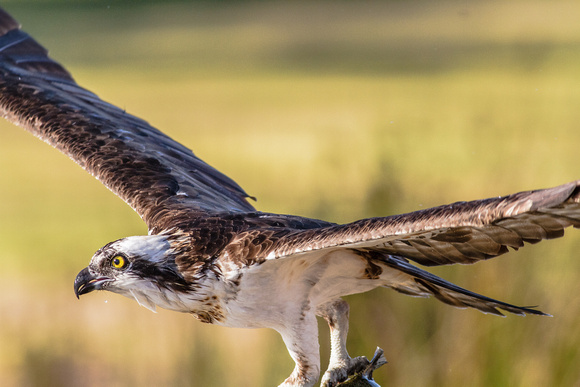 Unreal how close she was as she flew by. My heart still flutters, months later, as I relive this to post it.

Up into the air and off to eat her fish. We paused for a moment taking it all in, thinking that was it, realizing we just experienced the ultimate osprey fishing event. 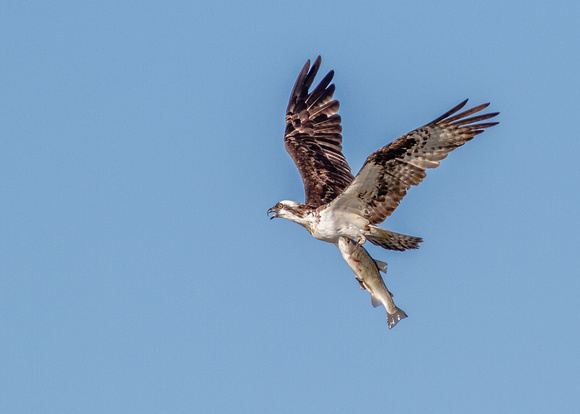 Then, if what just happened wasn't fulfilling enough, the osprey started circling overhead with her trout...

Many times they will circle once or twice before flying off to perch and eat. Today we got the Powerball prize of photo opportunities! 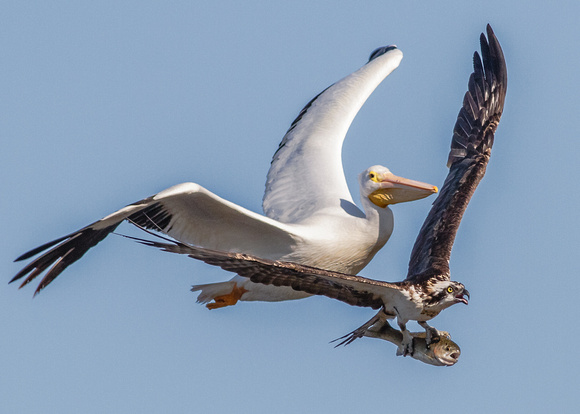 As the osprey circled, a big white pelican appeared and was very intent upon stealing the fish. 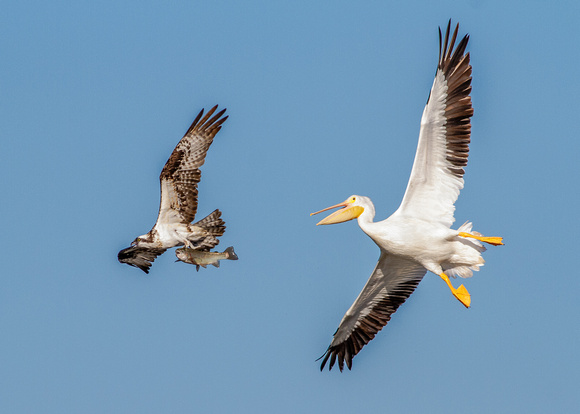 Look how the eagle-sized osprey is dwarfed by the pelican. 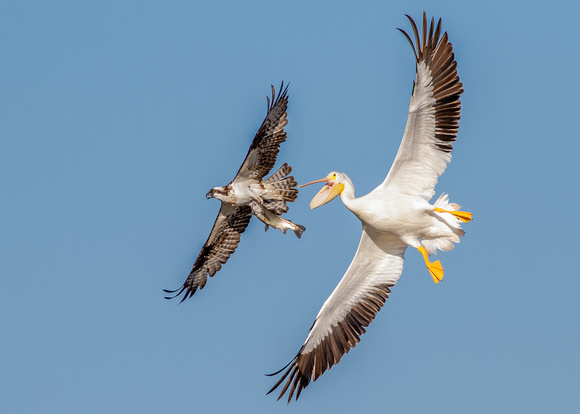 I couldn't believe what I was seeing, pinching myself while pressing the shutter. 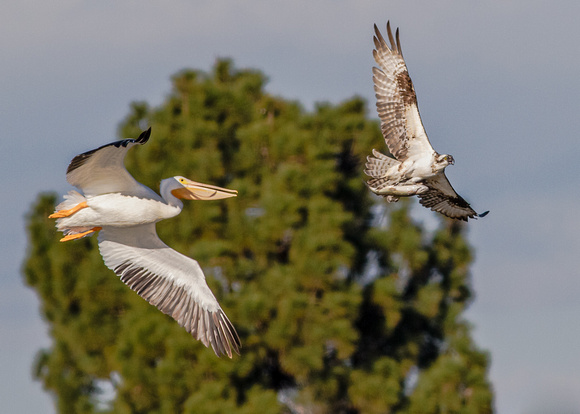 The osprey was chased around and around, but she made a clean get away. She worked way too hard to loose her fish to a freeloader! 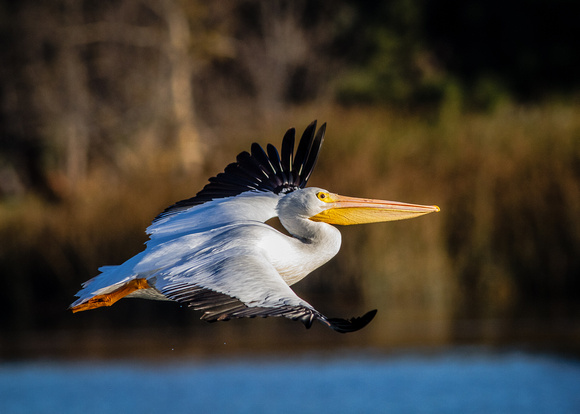 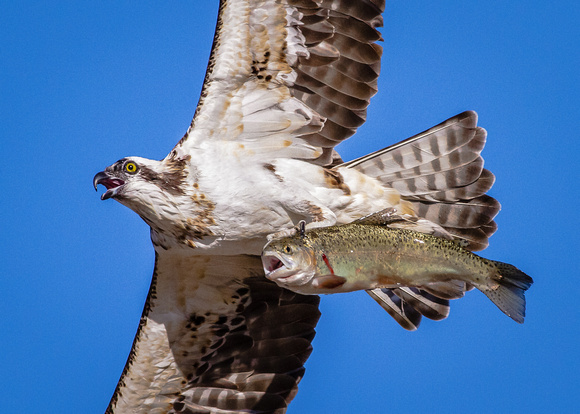 Enjoy your trout, you earned it!

April(non-registered)
Spectacular captures! And great story to go with it. Like the previous poster said, like we are right there!
Diane H(non-registered)
WOW!!! Awesome photos and storytelling. It's like I am there with you. I enjoy every minute of you great photography work. Keep it up!!!
No comments posted.
Loading...
Subscribe
RSS
Recent Posts
That's a Mouthful! Just Another Day of Fishing Raising Hummer Chicks It's Hummer Nesting Time Kids Will Be Kids 2013 is the year of the blog...
Archive
January February March April May June July August September October November December
© Kim Michaels
Powered by ZENFOLIO User Agreement
Cancel
Continue