90 photos
I had a wonderful opportunity to photograph beautiful falcons, up close and at the beach. Two very rare situations... getting close to raptors while flying, and more rare to see them at the ocean. I was on cloud nine. These birds zoomed right by me, such a thrill!

There is a very small and unnoticeable beach in San Clemente called Poche Beach. This beach experiences a huge challenge keeping the water clean from bacteria. The culprits are gulls that come from the nearby city dump to Poche to drink from a fresh water source located there. The birds transport human bacteria from the landfill to the beach.

The City of San Clemente hired a falcon service to rid the beach of the gulls. Keeping the gulls away has resulted in the water quality returning to normal levels.

Our local PBS affiliate did a story about the birds at Poche beach.

Falconry is one of the oldest relationships between man and bird, dating back more than 4000 years. It is known as the sport of kings. Historically, falconry was a popular sport and status symbol among the nobles of Medieval Europe, the Middle East, and Mongolian Empire. Falconry was largely restricted to the noble classes due to the prerequisite commitment of time, money, and space. Evidence suggests that the art of falconry may have begun in Mesopotamia, or in Mongolia and China, with the earliest accounts dating to approximately 2000 BC.

For nearly 200 generations in an unbroken chain of intangible heritage, falconers worldwide have passed along their knowledge and skills bringing this art to us in the 21st century. Today's modern lifestyle and rapid urbanization have restricted opportunities to practice falconry. This has lead to a dangerous decline in many countries.

Falconry is a traditional activity using trained birds of prey to take quarry in its natural state and habitat. It is a natural activity because the falcon and her prey have evolved together over millions of years; their interaction is an age-old drama. The falcon is adapted to hunt the prey, and the prey has evolved many ways to escape from the falcon. This leads to a fascinating insight into the way nature works and poses an intellectual challenge to the falconer in his understanding of behavior. His task is to bring the actors together on nature’s stage. To do this the falconer must develop a strong relationship and synergy with his bird, a one-on-one relationship based upon trust. A dedicated and patient human joins with a bird of prey and the result is a unique linking of diverse beings in a sport called falconry.

Falcons and hawks are also used for abatement: the use of trained raptors to flush, haze, or take birds (or other wildlife where allowed) to mitigate depredation problems, including threats to human health and safety. 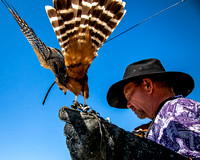 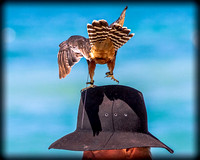 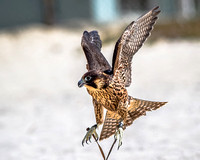