106 photos
I went to Arizona in search of the Salt Creek Wild Horses. Instead, I found out about the wild burros of the Lake Pleansant Burro Herd Management Area (just north of Phoenix). A big Thank You, to Steve Bird, the BLM Wild Horse and Burro Specialist, for showing me where to find the burros, especially on the roads I couldn't drive myself.

What beautiful creatures! Also beautiful is the desert in winter. With the cooler temperatures, I found burros out and about all day. In the summer, they survive the high temperatures and long periods of time without green forage by using shade and being the most active in early the morning and late afternoon hours. The average weight of an adult is 400 pounds with the males (jacks) being slightly larger than the females (jennies).

Foals can be born at any time during the year, about half of them are born in June or July. The gestation period is approximately 11 months. Domestic burros have been known to live past 30 years when well fed and cared for by man. In the wild, they live on average about 10 years.

Burros evolved in the deserts of northern Africa where the average rainfall is roughly two inches a year. Two distinct breeds are attributed with being the ancestors of todays feral burro in the American Southwest: The Nubian and the Somalian asses. Color markings for the Nubians are a black stripe across the shoulders and down the middle of the back, giving the appearance of a cross when viewed from above. The Somalian has leg stripes on both front and hind legs resembling a zebra's markings.

Early explorers brought both horses and burros to the New World. Some of these animals were released or escaped to the deserts of the southwestern United States and Mexico. With the discovery of gold and silver in the 1800s, miners brought more burros with them. These animals added to the small early populations and began to breed an increase in numbers. At one time, more than 10,000 wild burros wre found in California, Arizona, and Nevada. Today there are about 7,000 burros in this region. Arizona boasts the largest burro population with nearly 3,000 animals residing in the state.

Wild burros have only two natural predators. Mountain lions prey on all burros, and coyotes usually prey on the young, very old, crippled, or sick. This is nature's way of maintaining a healthy population. However, the number of mountain lions has declined, so the population of burros naturally increases without human intervention. Herd size can double every four years.

The Wild and Free-Roaming Horse and Burro Act of 1971 honored the Bureau of Land Management (BLM) with managing wild burros with other plants and animals in the environment to maintain a healthy ecosystem. The BLM is currently managing burros in the Lake Pleasant area so the burros, animals, and ranges can thrive while sharing the natural resources. Wild burros can be domesticated. When wild burros are removed from the Lake Pleasant area, they become available for adoption through the BLM's Adopt-A-Horse or Burro Program. http:/​/​www.​blm.​gov/​az/​st/​en/​prog/​whb.​html

I also found a few birds to photograph while in Arizona, including a thrilling sighting of a three year old juvenile bald eagle. 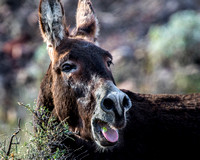 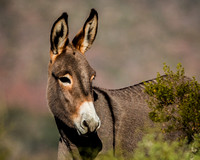 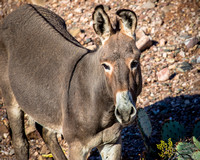 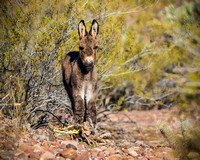 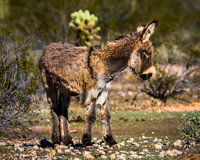 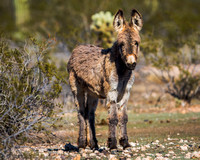 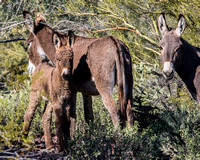