16 photos
The American Kestrel, sometimes colloquially known as the Sparrow Hawk, is a small falcon, and the only kestrel found in the Americas. It is the smallest falcon in North America, at 7–8 inches long.

American Kestrels are found in a wide variety of habitats, including grasslands, meadows, deserts, and other open to semi-open regions. They can also be found in both urban and suburban areas. A kestrel's habitat must include perches, open space for hunting, and cavities for nesting (whether natural or man-made). The American Kestrel is able to live in very diverse conditions, ranging from above the Arctic Circle, to the tropics of Central America, to elevations of over 4,500 meters (14,764 ft) in the Andes Mountains. The bird is distributed from northern Canada and Alaska to the southernmost tip of South America, Tierra del Fuego. It is the only kestrel found in the Americas. It has occurred as a vagrant in the UK, Denmark, Malta and the Azores.

The American Kestrel's primary mode of hunting is by perching and waiting for prey to come near. It feeds largely on small animals such as grasshoppers, dragonflies, lizards, mice and voles. They will also eat other small birds, and have been reported to have killed larger animals such as snakes, bats, and squirrels. Prey is almost always caught on the ground. Before striking, the kestrel characteristically bobs its head and tail, then makes a direct flight toward the prey to grab it in its talons. It also hunts by hovering in the air with rapid wing beats and scanning the ground for prey. Other hunting techniques include low flight over fields, or chasing insects in the air.

The kestrel maintains high population densities, in part because of the broad scope of its diet. It is characteristically seen along roadsides or fields perched on objects such as trees, overhead power lines, or fence posts. It nests in cavities in trees, cliffs, buildings, and other structures. The female lays three to seven eggs, which both sexes help to incubate. During the breeding season, the bird will carry large prey back to its mate or young.

American Kestrels are common birds to be used in falconry, and are also often used in scientific studies because they can be bred easily in captivity. 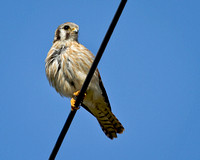 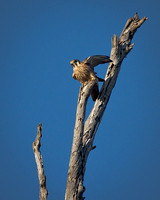 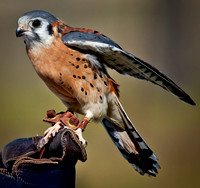